UNISON members working in NHS Scotland, or for contractors who are covered by the two tier workforce agreement, who have received a personalised email, should vote using the link provided in that email. The link is personal to each member and should not be shared or used by anyone else.

UNISON members who work in NHS Scotland, who have not received a personalised email can vote here or call UNISON Direct on 0800 0857 857.

UNISON, Scotland’s largest health union, has today (Monday, June 25) agreed to recommend that members accept a pay deal which is worth at least 9% for NHS workers across Scotland over three years.

The union, which represents 60,000 health workers who are covered by the NHS Agenda for Change agreement will now ballot members recommending acceptance of the deal, which was negotiated in Scotland between unions, employers and the Scottish government.

The main elements of the deal are:

Larger increments and faster progression for staff in post, but not yet at the top of their pay band – worth between 11.3% and 27.7%

Applies to all NHS contractor staff

UNISON Scotland’s health committee met today (Monday, June 25) to review the offer and agreed to recommend acceptance on the basis that it is the best deal that can be achieved by negotiation. All UNISON members working for the NHS in Scotland will have their chance to vote on the new three-year pay offer and changes to the NHS pay structure in an electronic ballot which will run from July 16 and close on August 14. The union will use the period in between to ensure that members have as much information as they need to make their decision on pay.

Overall, the deal will see an extra £410m invested in NHS Scotland pay over three years.It is funded by money released by the UK Government as part of the Barnett Funding Formula so it won’t cost jobs or patient care.

Other details within the deal include:

There are also commitments to look at some policy issues during the period of the pay including :

Utilisation and application of TOIL

“UNISON has led the way on NHS Pay in Scotland, campaigning and lobbying around our Scrap the Cap and Pay Up Now Campaigns. This is not a perfect deal and it does not go the full way to recovering the losses incurred by health workers during more than a decade of austerity and pay cuts. But it does put money in members’ pockets now and means that many will reach the agreed rate for the job faster than they would have done without the current pay arrangements. UNISON is Scotland’s largest health union and is leading the way in recommending this deal, which is the best that can be achieved by negotiation, to our members working in Scotland’s NHS.”

NHS Glasgow Clyde & CVS Branch are concerned that our members are seeing many reports of, and comments on, current movements on NHS pay from other sources. We have therefore compiled this brief update to ensure that you are fully aware of the actual facts in relation to pay discussions:

• The Framework Agreement on pay and proposed reform of Agenda for Change dated March 21st 2018 applies to England only. It does not apply to Scotland.

• UNISON is the only trade union that has lodged a specific pay claim with the Scottish Government.

• UNISON’s pay claim remains to be one that is higher than inflation and not only is a real pay increase for our members but begins to reclaim money not paid to our members over the past seven years.

• UNISON have met with the Scottish Government twice in the last week to discuss our Scottish pay claim and we will be meeting them again on March 26th.

• It was less than nine months ago that the Government was saying that their policy of a 1% public sector pay cap would remain in place until at least 2020. The last pay offer for this year pay had increased the offer to 3%, proof that UNISON’s Pay Up Now campaign was proving a major success.

• The Scottish Government promised hard working staff that the pay award would be in people’s pockets by April 1st but have now reneged on that. When final agreement is reached the pay award will be backdated to April 1st but we know our members need that money now, not when the Government can be bothered to get around to paying it.

• UNISON is led by our members and it is our members who will decide the way forward. Therefore when UNISON has concluded negotiations with the Scottish Government members will then decide whether they accept an offer or not.

• It is UNISON who have forced the Scottish Government to triple their original pay offer this year, it is UNISON who will continue to fight for and campaign for Fair Pay in the NHS.

Get involved and support the pay claim and become part of the UK’s biggest union at www.joinunison.org

PATS ON THE BACK ARE NOT ENOUGH TO LIVE ON

A new UNISON film, featuring former Dynasty actor Stephanie Beacham, takes a tongue-in-cheek look at why the government should give teaching assistants, paramedics, refuse collectors and other public service workers a pay rise.

The two-minute satirical Pat on the Back film highlights the government’s hypocritical attitude to public servants – commending their dedication and hard work, yet refusing to lift the public sector pay cap, says UNISON.

But behind UNISON’s spoof film is a serious message. Low pay not only harms individual employees and their families, it means services are run down as staff desert the public sector in search of higher wages.

Stephanie Beacham said: “I wanted to do this film because I find it deeply unacceptable that public service staff who keep us safe, look after us when we’re ill and keep our local services running haven’t seen a pay rise in seven years.

“Our public service workers deserve more than a measly pat on the back, they need substantially more money in their pockets. The public sector pay cap has to go now, and be replaced with a decent wage.”

UNISON general secretary Dave Prentis said: “Giving public service workers a pat on the back isn’t going to put food on their table, petrol in their cars or pay their bills.

“Government ministers have been quick to praise public servants, but slow to appreciate the financial strain their harsh pay policies are putting on households up and down the country.

“In the Budget, the Chancellor needs to dig deep and give public service staff a pay rise that more than matches the rising cost of living.”

UNISON has been engaging with NHS Glasgow and Clyde interpreters in recent weeks to discuss their concerns about working for the Health Board.

A few weeks ago we held an open meeting which was attended by more than 20 interpreters following the publication of our survey. We have also met with the employers informally to discuss the concerns raised by interpreters.

Today (Mon 4 Sept), we were notified by the employers that a meeting was to take place on Tues 5 Sept to begin discussing a review of the service.

UNISON objected to the meeting being organised and conducted without trade union representation. We also expressed concerns that NHSGGC had so far ignored our concerns about terms and conditions of employment.

We have now been informed that the meeting planned for tomorrow will not go ahead and UNISON will be invited to attend the next meeting on 3 Oct.

We have also received an invitation to meet with Snr Managers to discuss the terms and conditions issues on 19 Sept.

The formal terms of reference for the review have not yet been agreed or published. However it is clear from the draft paper sent to UNISON that employers want to redesign/ change the model of delivery and save money where possible.

This is an important meeting, but it is a first meeting. I propose to focus on:

• Lack of communication and PDP for interpreters

• Payments when jobs are cancelled

Due to the timeframe of meetings we are going to organise another OPEN meeting for all NHSGGC Interpreters. The provisional date is Thurs 5 Oct at 6pm at our UNISON Office in Empire House, 131 West Nile Street, Glasgow.

Join the facebook group specifically relating to this ongoing issue at:

Almost 300 Nurse Assistants, HCSW and other Band 2 nurses have responded to the UNISON campaign to maximise their pay which was launched on International Nurses Day.

The campaign seeks to encourage UNISON members to evaluate the key roles and tasks in the job to help them determine whether they do ‘personal care’ or ‘clinical care’. Members involved in clinical roles MAY have a legitimate claim for a Band 3.

Cathy Miller said, “UNISON has already pursued a number of claims for Band 2 nursing staff, so we know that many of them are working above the Band 2 profile. The response so far has been terrific and we won’t rest until we are confident that every UNISON Band 2 Nurse has the information they need.”

Following up on the activity so far, the union will lodge initial claims for 280 members, with new enquiries coming in everyday.

If you are a Band 2 NA and you do much more than ‘personal care’ get in touch with UNISON on campaigns@unisonglasgowclyde.com or 0141 331 4450 for more info.

Following on from a formal offer from the Scottish Government to submit ‘joint evidence’ to the NHS Pay Review Body, UNISON has written to the PRB and challenged their independence.

Writing in letter dated 24 May to Phillipa Herd, Chair of the PRB UNISON said, “The trade unions’ long-standing support for the Pay Review Body process is being challenged by members, who perceive that the PRB is providing cover for a politically-imposed ‘pay cap’ and is ignoring the fact that NHS wages have not kept up with the costs they experience”

adding, "If you believe that the Review Body process can deliver fair pay for NHS staff we would urge you to make it clear that your recommendations for the next pay round will not be bound by the Government-imposed pay cap."

The union will meet in the next few weeks to consider the Governments offer, but so far has not ruled out rejecting it in favour of pay barraging. To achieve this ALL other unions in Scotland will need to agree.

The last time a similar offer was made, the RCN refused to leave the PRB and the Government withdrew the proposal on the basis that it would only negotiate if ALL unions signed up.

Glasgow Is Not For Sale

Cathy Miller, Branch Secretary, addressing the crowd said,” NHS Glasgow and Clyde had to find £60 million pounds cuts every year for the last 5 years and £100 million this year in cuts to its budget. Staff unions believe the board is underfunded and at a point of making cuts which will affect patient care.

“With shortages in nursing, catering, administration and community services these cuts are impacting on patients. This year we are facing £100 million cuts, let me be clear, there is nothing left to save. The Chief Executive of the board has said wards will have to close.” 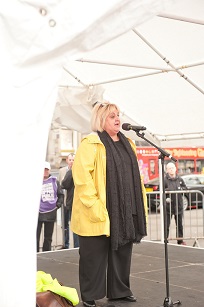 You Say Transformation, We say CUTS!!

UNISON NHS GGC & CVS members, come join us on the rally and defend the cuts in NHS and Council services. We need to stand stronger together to make our voices heard. We will be meeting at the peoples palace 10:45 for an 11am March to George Square. Come along and walk with the Branch Banner. Support our essential services. We are Not Overspent, We are Underfunded! You say Transformation - We say Cuts! 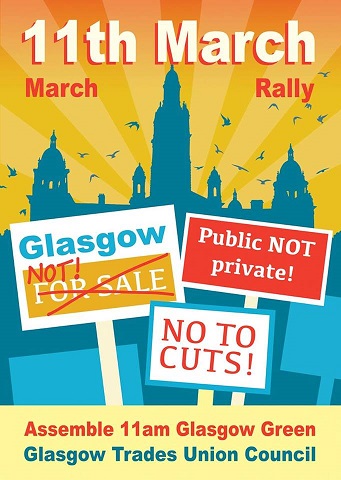 Cathy Miller, Branch Secretary said, "UNISON NHS GGC & CVS Branch is proud to support this excellent initiative and look forward to working with and supporting our new modern apprentice members in the future."